Official websites use .gov
A .gov website belongs to an official government organization in the United States.

ABOUT THE TASK FORCE

The National AI Initiative Act of 2020 called on the National Science Foundation (NSF), in coordination with the White House Office of Science and Technology Policy (OSTP), to form a National AI Research Resource (NAIRR) Task Force to investigate the feasibility of establishing a NAIRR, and develop a roadmap detailing how such a resource could be established and sustained.

Composed of members from government, academia, and the private sector, the NAIRR Task Force was required to addresses topics such as the appropriate ownership and administration of the NAIRR; a model for governance; required capabilities of the resource; opportunities to better disseminate high-quality government datasets; requirements for security; assessments of privacy, civil rights, and civil liberties requirements; and a plan for sustaining the resource, including through public-private partnerships.

Throughout its work, the Task Force consulted a range of experts and stakeholders from government agencies, private industry, academia, and civil and disabilities rights organizations; and was informed by ongoing interagency efforts.

The NAIRR is envisioned as a shared computing and data infrastructure that will provide AI researchers and students across scientific fields and disciplines with access to compute resources and high-quality data, along with appropriate educational tools and user support. The goal for such a national resource is to democratize access to the cyberinfrastructure that fuels AI research and development, enabling all of America’s diverse AI researchers to participate in exploring innovative ideas for advancing AI, including communities, institutions, and regions that have been traditionally underserved. 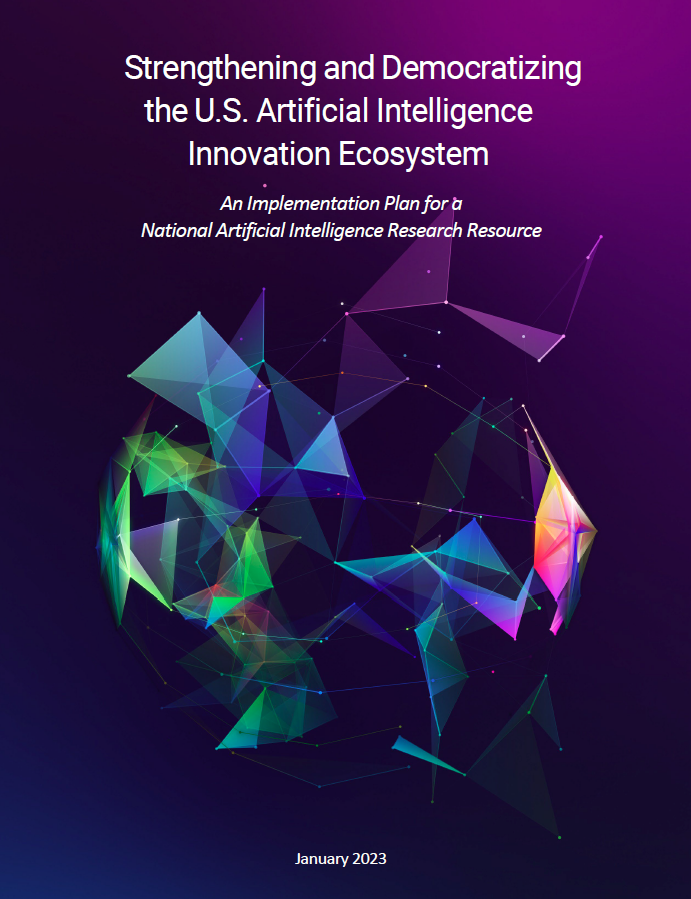 On January 24, 2023, the NAIRR Task Force submitted its final report to the President and Congress. The report proposes an implementation roadmap for the NAIRR that would build on existing and future Federal investments; design in protections for privacy, civil rights, and civil liberties; and promote diversity and equitable access. It lays out a phased approach to stand up the administration, policies, security framework, and cyberinfrastructure that would support the full spectrum of AI research – from foundational to use-inspired to translational.

On May 25, 2022 the NAIRR Task Force submitted its interim report to the President and Congress. This report, the first of two reports that the Task Force is responsible for delivering, lays out a general vision for the NAIRR, and how it could be structured, designed, operated, and governed to meet the needs of America’s AI research community.

Concurrently with the publication of the interim report, the Task Force issued a Request for Information (RFI) to solicit public feedback on the Task Force’s preliminary findings and recommendations outlined in the report, and particularly, on how the recommendations could be successfully implemented. The RFI was open for comments from May 25, 2022, through June 30, 2022, and generated 24 responses from academia, the private sector, and civil society. These responses are available here. In addition, the Task Force co-chairs hosted a public listening session on June 23, 2022 (announced in a Federal Register Notice) as an additional means for gathering public input.

Further information about future Task Force meetings will be posted as they are scheduled.

* Due to technical difficulties only a partial recording of this meeting is available.

Upon launching the Task Force, the White House Office of Science and Technology Policy and the National Science Foundation requested input from the public to inform the Task Force’s work and development of a vision for the NAIRR through a Request for Information (RFI) published to the Federal Register. The comment period, open from July 23, 2021, through October 1, 2021 (extended from an original deadline of September 1, 2021), generated 84 responses from industry, academia, and government stakeholders.

The responses received through the RFI are posted at the link below. Please note that these responses do not represent the views and/or opinions of the U.S. Government nor those of the National AI Research Resource Task Force.